Our solar fountain: A horror story

We are always careful to keep our running costs as low as possible. In this context, we were bothered for a long time that the weekly fuel consumption had reached an almost unbearable level. We had to run our gasoline generator almost constantly to fill our two water tanks of 5,000 and 2,000 liters capacity. Nevertheless, our gardeners were more concerned with running watering cans through the garden than caring for the planting of vegetables and fruit. Our water supply - especially the garden - was just too cumbersome, too inefficient and too expensive.

Since you do not have to worry about enough sunshine in Africa, the solution was quickly found: a solar water supply for the garden. Quickly the situation was calculated; a return on investment within one and a half to two years seemed realistic. And so in March 2017, before the start of the great rainy season (which lasts from April to early May), the first steps were taken. A larger water tank (10,000 liters) was purchased, a small 1.5 meter high water tower was built and a corresponding well (30 meters deep) drilled. A photovoltaic solar system should then operate a DC solar pump to ensure that the water tank was filled daily, so to speak. An irrigation system should then be connected to the tank. The solar pump would work only in the sunshine, but in cloudy skies or in the rainy season you would hardly have to water the plants in the garden anyway.

Quickly a technician was found, based on a reliable (I emphasize "reliable") recommendation, to complete the whole project. He gave us a reasonable price for the well and promised to take care of the details of the solar system - which started our horror story!

Contrary to the recommendation of the specialist in the photovoltaic business, our "technician" said that he needed two additional solar panels. These were quickly procured, now that the rainy season was over. The attempt to operate the solar pump, however, was not yet successful. The problem was, according to "technicians", due to two missing batteries to ensure the increased energy demand in the first few seconds of starting the pump (this is a real challenge for any battery starting petrol engines - but not for electric motors, as we have since experienced).

So more batteries were acquired. Nevertheless, the pump still did not work. In the meantime, several weeks had passed because the punctuality of our "technician" left much to be desired; he seemed to be a very popular man. Finally he had found time for us again and said that a solar controller was needed. We invested another 80 euros and - lo and behold - the pump was running (finally)! We were delighted with over 10,000 liters of water daily, because it was already the end of June, and the dry season had begun.

However, it took only three or four days and our gardener came to me excitedly and reported that the pump stopped working. Meanwhile, having grown tired of our "technician", I contacted a new specialist (electrition by profession), who also knows a little about sanitary engineering.

The pump was taken out of the well for control. One already saw with the naked eye that it was extremely dirty. The problem, I was told, was that the pump was operated on the marshy bottom of the well and not, as usual, two or three meters above it. It was repaired by the son of our original technician and lowered this time to a height of 2 meters above the swamp. Behold, the water gushed again - surprise: for a full two days! For a renewed repair of the polluted pump this time, however, spare parts that had to be procured from abroad were missing - and which have not arrived until today (we are in November). So I decided to buy a second solar pump, because in the foreseeable future we would have to set up a second solar irrigation system on another property anyway. For this you could use the first pump - as soon as it is repaired. Besides, the garden could not wait for repair of the pump. This would simply take too long (which actually turned out to be true) and cost unnecessary gas and countless hours of work.

Since I no longer wanted to take any risks, I asked a new well drill to thoroughly clean the well hole before the inlet of the new pump. I also wanted to make sure that we positioned the pump far enough away from the possibly swampy bottom of the well. We tested the operation for a few hours at a height of 25 meters - ie 5 meters above the 30-meter deep well. The pump did not run dry, so enough water was available at the height of 25 meters. After the successful test, the pump was permanently installed. By now it was already September - the garden and the gardeners were happy about the abundant water available. You almost had to explain to them that you can also "drown" plants.

Everything seemed fine - until last week when the horror report came that the pump stopped now and then. This could certainly be due to the rainfall (and lack of sunshine), which are common in the small rainy season in November. Or maybe the batteries - which seemed unlikely to me. Or was it the solar controller that just had quirks? Or was the well really dry despite the rainy season? That was unlikely. Again, the pump was pulled out of the well hole - and lo and behold, it was totally dirty again.

To literally get to the bottom of the problem, it would have been necessary to lower a small camera into the well. Finding such a device in Africa is certainly not easy and expensive. And the effort would not solve the problem, namely that the well is constantly dulling.

Now, we recalled that the pump had encountered some resistance when pulled out, which was difficult to overcome by the sensitive shaking of the rope to which the pump was attached. As if it would get stuck on a protruding PVC pipe.

After consulting with two other well builders, we came to the logical conclusion that the well from a certain depth onward (probably where the resistance to pull out the pump came from) has no PVC sheathing. The well builder must have saved on material. This allows mud to seep unhindered into the well hole. The bad news: Solving this problem with an existing well is not possible. 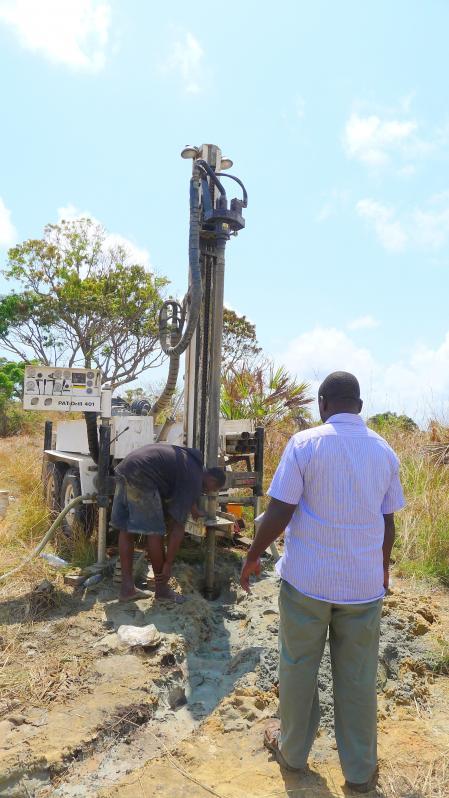 To be able to operate the system again, it would now be necessary to drill a new well hole. A recourse to the original technician - as usual in Europe - does not exist in Tanzania. And even if you win a lawsuit, the prospect of a financial settlement is extremely low. In a country where almost everything is paid in cash and even many medium-sized entrepreneurs have no bank accounts, there is no realistic hope for regress. As soon as someone has paid someone for their services, the money is usually already spent or distributed to employees, family members or friends. Saving is a foreign word for many. Everything is paid in cash and yet practically nobody has money.

We wished we did not have to go through this kind of experience. At the same time, however, we should emphasize that we have been saved from much.

There are a few "rules of the game" that we have gotten used to: 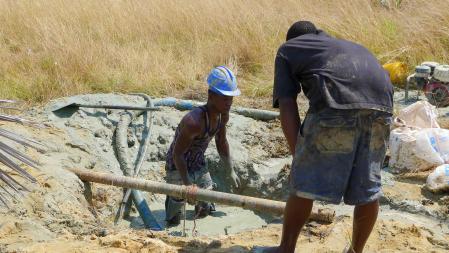 Craftsmen are often not interested in a continuous business and loyal customers. They would rather have a few euros more in their pockets today than they would have a safe and good income in the coming months. This way of thinking is alien to us, and it is not easy to get used to these completely different values.

Building work is not easy in a culture that is so different from ours. We are grateful that we can still smile about most of the problems and that we have been saved from major damage so far. We see this as a "blessing of God" and as "His guidance".

Our story is not finished yet. Since the garden has reached a size where you can only survive a few days in the dry season without water, we decided to tackle the problem immediately. Three well drillers gave us a quotation, one of them was awarded and we hired a person to make sure the work to drill the new well was done carefully. I assured myself about the quality of the material used and personally participated in the most important construction phases. After three days we were able to lower the "allegedly" repaired solar pump into the new well shaft. Unfortunately, the pump did not work again, and we noticed at the same time that the solar converter also failed. The purchase of a replacement pump was inevitable, and since today, Friday, November 17, the water supply of the garden works as it should have been from the end of April onward. We had learned a lot in the last few weeks and can now call ourselves well specialists. There is always something to learn. You just have to see things in a positive light.